Members of KCR and YJCR: “Young people should participate in these uprisings with great enthusiasm” 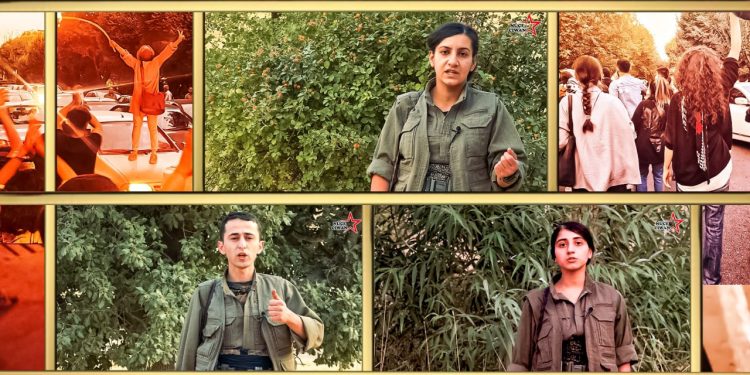 NEWS CENTER – In response to the killing of 22-year-old Jina Amini by Iran’s Fascist ‘Morality Police’, the uprisings in the cities of Eastern Kurdistan have been going on for 6 days. In Eastern Kurdistan and Iran, thousands of people are in the fields every day, and they no longer accept the provincial regime.

The rebellion is based on the killing of women.

Young people should participate in these uprisings with great enthusiasm. The spirit of these riots is the spirit of the youth. The slogan of these riots was clearly inspired by Leader Apo’s thoughts. Young people should continue the historical path that has been followed until today. They have to get out of the defensive position and attack and crush the enemy. The youth of all regions of Eastern Kurdistan should participate in the march of this revolution.

YJCR member Sirwan Qandîl said in her appeal to young women: “The killing of woman is the reason for time for revolution. As it is known, in Saqiz to the universities of Tehran, people have taken to the streets led by women and young people. The cause of these riots was Shileri Rasuli and today Zhina Amini. Here the reality of the occupying regime of Iran comes to face. We welcome those attitudes of the people. It is a moral and patriotic attitude. The motto of Women, Life and Freedom started with Leader Apo’s struggle in North Kurdistan. Today by the vanguard of the women this slogan is chanted in the streets of Seqiz, Diwandere, Mariwan, Sine and Universities of Tehran and it has become the era of the Revolution. As Leader Apo has stated, the revolution of Eastern Kurdistan will be won by the leadership of women.”

Neval Riha, member of YJCR, said in her appeal to young women: “First of all, we welcome the riots in Eastern Kurdistan and Iran. Undoubtedly, in such an important process as well as in such a sensitive process, the development of such rebellions against the patriarchal mentality, against Iran’s aggression, against Iran’s occupation is very important, very meaningful, very historical and very valuable. We salute you for this.

When we look at the result of this riot, the reason for an attack on a woman, this riot took place today. The streets of Eastern Kurdistan and Iran continue up to that point. This is what Leader Apo said, “Attack on a woman, killing a woman, marrying a woman at a young age can cause a revolution for us. “