No Result
View All Result
Home All News Analysis

"The screams of freedom will pierce like a bullet through the deaf ears of male ignorance. Rooted in the apoistic paradigm, woman's liberty notes will reassemble humanity!" 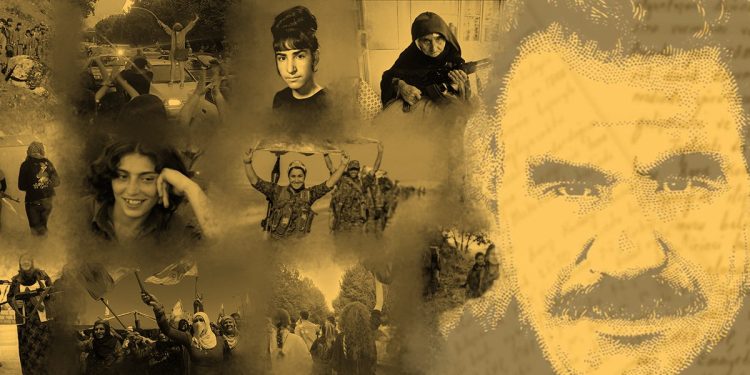 “If you want to understand how liberated a society has become, you have to look at how liberated a woman must be… A people whose women are not free has no chance of being free.” – Rêbertî

One of the countries where the Kurdish femicide policy is systematically carried out in the name of “religion” is the colonial and despotic Iranian mullah regime. In the genocide against the Kurds, which the dictator Saddam described in the Koran as the “Anfal” verse, he massacred 182,000 Kurds in southern Kurdistan and sold thousands of Kurdish women between the ages of 10 and 20 to Arab palaces as concubines. Kurdish women were already being sold on the markets in Egypt. Saddam was supposedly a Muslim. The despotic Assad regime chose no other path. The Turkish Republic eliminated thousands of Kurdish girls in the Dersim genocide using the same methods. Thousands of Dersim’s girls were and are still missing. The barbarity of ISIS, as well as their mentality and intellectual fathers, inflicted the greatest brutality in history on thousands of Yezidi Kurdish women. They sold our 10-year-old girls in the markets and declared that they were doing this in the name of “religion”.

In order to respond to the endless search for freedom, it is now necessary to remember all kinds of rebellion narratives. We must make it a remedy in society and in individuals against the “learned helplessness” imposed on society. Let’s hear the incessant moaning that devalues ​​people: “Blind people, who carry within themselves the prejudices of society and have experienced all forms of exclusion, prejudice spreads throughout the society in which they live and sticks like a stamp on their soil.” Your allegations increase and then dissipate in vain. There is neither God nor man to lend a hand, everything happens in the depths of nothing.” We too, everywhere and under all circumstances, say: “One must confront the injustices of life with intellectual violence and anger, which can do it the most harm.”

Rebellion against oppression is an indispensable human right to dignity!

The tradition of Kurdish women, who are carriers of the Kurdish national consciousness of freedom, to rebel against the regime of evil mullahs in Iran has historical roots. Just a few days ago, the evil Iranian mullah regime’s so-called “moral(!) police officers” beat 22-year-old Kurd Jina Amini (Mehsa Amini) to death because her hair was showing. The so-called Islamic regime that occupies Kurdistan carries out its Kurdish policy of murdering women in a systematic and coordinated manner. The apoistic women’s liberation ideology that refuted the dark history of the Middle East and reunited women with the role of historical freedom became the nightmare of all these reactionary despotic powers. The death of Kurdish women systematically caused by this vandal male mentality, will trigger a new resurrection and awakening in Rojhilat Kurdistan and Iran. History confirms Mr. Öcalan again: The Kurdish Women’s Liberation Revolution is Changing the Face of the Middle East Again!

In the past, Kurdish women resisted Saddam’s atrocities, against Assad’s servitude, now in the dungeons of the fascist Turkish Republic and in the prisons of the Iranian regime of evil mullahs, and they continue to resist magnificently. The hope of mankind lies in this women’s liberation revolution. The brutal targeting of all these women is due to the fear of free women. But fear avails nothing to death; In the heart of the Middle East, the liberation revolution of apoist women will definitely sprout. This is the shadow of patience of the times, the rebellion of women against the male mentality. The screams of freedom will pierce like a bullet through the deaf ears of male ignorance. Rooted in the apoistic paradigm, woman’s liberty notes will reassemble humanity!

The apoist women’s liberation revolution will overthrow the rule of the occupying and colonial regimes. The Devşirme project of moderate Islam, which has been launched by the world powers, will not be able to stand in the way of this either. Those who brought about the Arab Spring prematurely drove the peoples to despair. But it is known; The hope for democratic liberation in the Middle East lies in the wellspring of freedom for Kurdish women who have overcome all geopolitical threats and have resisted continuously for half a century. May those who have not lost their connection to the natural conscience open their hearts to and support this women’s freedom revolution. Listen to the freedom screams of the women rising from the fields and growing like an avalanche, you will easily hear this jin, jiyan, azadi age fermented with rebellion!

When it comes to the Kurdish people of the Middle East, we witness wild charlatans who always claim to speak for Allah and hide under the guise of piety. In the name of religion and belief, fatwas are immediately issued against the genocidal policy and the genocide of Kurdish women. As all these existential threats loom large, the Kurdish people, who are to be persistently drawn into the halls, must create a conscientious atmosphere on the streets that makes the world tremble. It is necessary to bring about political solutions to the chronic problems in the Middle East and Kurdistan with the power of conscience of the streets. It is necessary to create more political freedom for the Kurdish people. The real power no longer lies in the routine acts of pleasure, but in social resistance, which is based on a deterrent power of persuasion and influence. Repressive regimes cannot stand up to the demands of educated and conscious masses of resistance. As long as we know how to take the apoist paradigm that is creating a general social awakening to the masses, with the right style and age-appropriate methods.

Members of KCR and YJCR: “Young people should participate in these uprisings with great enthusiasm”

Members of KCR and YJCR: "Young people should participate in these uprisings with great enthusiasm"