YPJ Commander: “We stand by women in Iran”

YPJ General Command Member Rohilat Afrin saluted the women protesting the murder of Jîna Emini in Iran and said, "We stand with the women in Iran with all our strength." 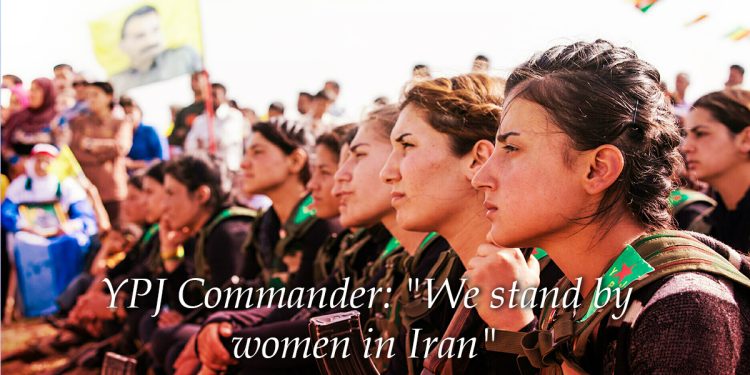 NEWS CENTER – The protests against the detention of 22-year-old Jîna Eminî by the “morality police” on the grounds that her hair is showing, and her murder as a result of torture in Iran continue. Thousands of people in Rojhilat and many cities in Iran have been protesting the Iranian regime on the streets for days.

Rohilat Afrin, Member of the General Command of the Women’s Defense Units (YPJ), replied to the Ronahi newspaper about the uprising in Rojhilat and Iran.

How do you evaluate the Iranian regime’s system and the unlawfulness against women?

Iran’s system is especially against women, it is built on a male-dominated mentality. The laws that Iran calls the so-called right to protect women are policies that deny women’s language, culture and power. In Iran, women are not given any rights. Therefore, we cannot say that there are women’s rights and protection in Iran.

Women in Iran are constantly exposed to violence in every field. Why is the Iranian system against women’s liberation? I mean, why does it implement special policies for women?

In the history of Iran, women had a very important place and power in the East Kurdistan revolutions before 1979 and in the popular revolts against the dictatorship. They led the revolts and revolted against the dictatorship. In addition, women became the guardians of language, culture and history. For this reason, the fighting Kurdish woman always creates fear in the Iranian Republic.

Not only in Iran, but wherever a Kurdish woman revolts against the enemy, she creates fear in the hearts of the ruling powers. Not only Kurdish women, but also Baloch, Azeri and Persian women have become conscious and developed themselves. They researched the male-dominated system, the Iranian regime, and recognized the system. They also have a conscious stance against this system. We see that women have always led the revolts and revolutions in history.

That’s why it’s always women who are tortured in the Iranian system, because it’s the woman who can gain freedom and save society from dictators. This causes Iran and all governments to fear the power of women, especially Kurdish women. The Iranian regime is committing the greatest vice in the name of morality and is targeting women from all sides. Iran knows that women are the power that will defend an alternative policy against its fascist regime and liberate the society, so women are always on target.

Frightened by the protests that have been going on for days, the Iranian state has further increased its attacks on activists, especially women. What is the cause of this panic? Why do they specifically target Kurdish women?

The Iranian government wants to enslave the people by carrying out a starvation policy. The people of Rojhilat reacted to this policy by rising up under the leadership of women. This revolt created great fear within the Iranian regime. For this reason, he was attacking the people and wanted to silence the voice of the people as soon as possible. Wherever a rebellion broke out in Iran, the regime murdered hundreds of women under the name of sharia, under the name of honor. Because it is women, especially Kurdish women, who can save this society from the bondage of the regime. This causes women to become the target of the regime and all powers.

After the murder of Jîna Eminî, women from Rojhilat went out to the fields, burned their headscarves and cut their hair. How do you see these reactions as Rojava Revolution forces?

Jîna Emini is one of the women murdered by the Iranian regime. To protest the murder of Jîna, women from Rojhilat once again take to the streets and say enough is enough for the dictatorship and the Islamic regime. We can describe the actions carried out by the women of Rojhilat as a spark of revolution led by women. Actions to protect Jîna Emini may lead to the start of the revolution in Rojhilat. Because going out, taking off the headscarf and burning it is to burn the brain of the male-dominated system. The integrity of the female spirit is seen in such actions. If women take care of each other with one voice and one soul, they will definitely be liberated.

As YPJ, do you have a call for activist women?

In such a situation, our call for the four parts of Kurdistan and the women of the world; Organize and defend yourself. This is very important and necessary. We should never give up on this. Just as we share our pain together, we must also take the steps we took to freedom together. As YPJ, we stand by the activist women with all our strength. We believe that there will be a revolution led by Kurdish women in Rojhilat. As YPJ, we stand by all women fighters and salute them.